A famous watchmaker finished what he considered to be his masterpiece. Carefully, he placed it between two clocks that were much older, yet accurate, time keepers.
The one on the left turned to it and said, “I’m sorry for you,” it sighed. “You’re ticking bravely now. But you’ll be exhausted when you get through thirty-three million ticks this year.”

“Thirty-three million ticks?” gasped the frightened clock. “I can’t do that!” And it shook violently and stopped.

“Don’t listen to such trash,” said the clock on the right. “You’ve only got to take one tick at a time. There, now, isn’t that better? Now, take another tick. And one more. Easy now. Again. Isn’t that better?”
“Is that all?” asked the new clock. “That’s easy. OK. Here I go!” And it started bravely once again - one tick at time. At the end of the year it had made thirty-three million ticks with not one problem.

We do not need to worry about the next hour or day or week. Our Lord simply asks that we trust Him moment by moment - like the clock: one tick at a time.

The Psalmist talks about giving “understanding to the simple.” Often we complicate our lives and become overwhelmed and depressed by looking at “thirty-three million ticks” rather than “one tick.” We awaken in the morning and before we realize it have scheduled a month’s worth of activities into those few morning hours.

Dwight Eisenhower once said, “We need to do things that are important, not urgent. Life can be simple.”

Prayer: Help us, Father, to carefully separate the “need to dos” from the “want to dos” and live God-guided lives. In Jesus’ Name, Amen.

Scripture for Today: Psalm 119:130b it gives understanding to the simple. 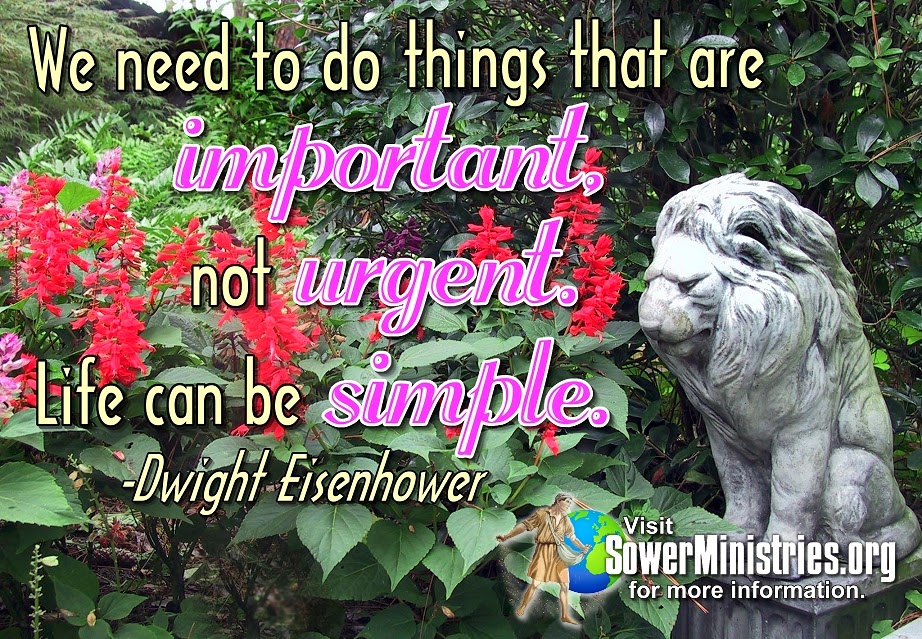